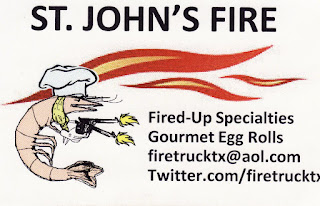 Our across the street neighbor, Chef Joel St. John, is a real deal, award winning culinary professional. At first I was a bit daunted by the prospect of cooking for a real chef. The first meal I ever served him was my Kung Pao Shrimp, and I won him over big time. He also loves my Shrimp Enchiladas. Here’s what he has to say about my pork spareribs. Yes, I’m bragging!

What an honor. Here’s a brief write up about Chef Joel; and yes, I shamelessly stole this write-up from Texas Business Directory

Before joining Spencer’s for Steaks and Chops, Chef Joel St. John mastered many types of regional cuisine through his work at major restaurants and hotels in New Orleans and Houston. Under his leadership as executive chef, The Houston Brewery was deemed ‘The Best’ by local and state media, as well as by Houstonians themselves.

Chef’s credits include famous restaurants in New Orleans such as Commander’s Palace, Mr. B’s, and Seb’s, as well as Houston favorites The Brownstone and Harry’s Kenya

In New Orleans, while St. John was executive chef at Seb’s, the Mississippi riverfront restaurant was honored as one of The 1990 Top 25 Grand Restaurants by Champagne Mumm and New Orleans magazine. St. John was chosen as one of six dinner chefs to prepare the awards banquet for ‘The Top 25’ along with special honoree, the legendary Chef Paul Bocuse of France.

It’s an honor and a privilege to cook for Chef Joel, and to see his approval of my efforts. He and Gretchen are very kind to us, and regularly share wonderful creations he whips up in his home kitchen. Gretchen, by the way, is no slouch either when it comes to rattling those pots and pans. Great neighbors; great fun; great SEC rivals (They’re LSU fans.); and just a classy act all the way around. How nice to have such gracious friends.