History of This Cookbook

I’ve been the head cook in our household since 1983, when I got laid off at the same time Sherry returned to work from maternity leave. We soon discovered that I was a m 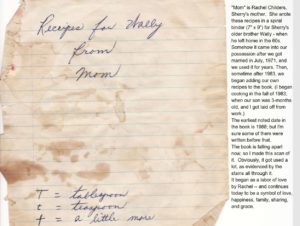 uch better cook than she; plus I enjoyed it much more than she did. I began writing notes and pasting recipes into a spiral bound “cookbook” her mother Rachel had hand written for Sherry’s brother, and which she then gave to Sherry in 1971 when we were first married.

By 1992, we’d joined the “computer age,” and my younger brother gave me a DOS based cookbook program which I immediately began to populate with all the notes and recipes I’d collected over the years. Then, shortly after that, I discovered the joys of HTML and the world wide web, and naturally began to publish my “cookbook” to the net.

The “book” went through several painful iterations, as I learned more about HTML, and more importantly, about the complex issues arising from trying to maintain a unified publication on the web. I learned the tedium of having to edit EVERY file on the website whenever I added ONE new recipe (I should NEVER have put a table of contents on EVERY recipe page.). I experimented with frames, but soon learned that frames were prone to show up great in one browser, and screwy in other browsers.

I went on for years, experimenting with different approaches, style sheets, etc., until one day it dawned on me that blogspot.com had done most of the hard work for me already. And that there was no need to re-invent the wheel.

In the meantime, I’d acquired a magnificent recipe manager program called Big Oven, that would automatically generate an HTML file for my recipes. I toyed with that for a while, and eventually settled on the simplified recipe format you see in this blog. We used Blogger for years; and then in 2016, we changed over to the WordPress.