A recent post to the Frayser High Class of 1969 website by Gary Harrison (class of ‘72) mentioned famous wrestlers, Tojo Yamamoto and Jackie Fargo.

It reminded me of two other famous personalities from that same era, and I thought I’d relate this tale to my classmates. But first – some background.

While I was teaching harmonica at U of Memphis, Memphis in May hosted an International Harmonica Festival, which included among other events, a jam session on the Mississippi River party barge (Remember Richard Manning’s party?). The Memphis in May people asked me to attend this festival as an evaluator. Being friends with the director of the festival, world renowned harmonica virtuoso and former Harmonicat Pete Pederson, I was able to get complimentary passes to the river boat party for my class.

To my delight and surprise,

one of the attendees at this party was star of Saturday Studio Wrestling, Billy Wicks. Yes, Billy, father of Frayser’s own Debbie Wicks, is a harmonica player too.

I had never met Billy before this, and was surprised that he was as happy to meet me as I was honored to meet him. He kept saying “THE Randy Byrd? THE Randy Byrd?  From Frayser?; It seems my reputation had preceded me. What a surprise that Billy would know who I was.

All that evening, Billy took me around the party introducing me to top players in the world as “My old friend and one of the finest harp players in town.” I don’t know when I had ever been treated so kindly as Billy treated me that night. What a gentleman. I was so moved by his kindness, that I looked up Debbie through classmates.com and shared with her my sentiments about her dad. She forwarded those remarks to her father.

A couple of years after my contacting Debbie, Billy called me from his home in North Carolina to tell me of Pete Pederson’s death. In the course of our conversation, he mentioned that his old nemesis, Sputnik Monroe, also lived in Houston.

RB: Is this Sputnik Monroe?

Sputnik: Yeah, who is this?

RB: This is Randy Byrd; you probably don’t remember me but I used to throw your paper when you lived in the trailer park on Hwy 51 out in Frayser back in the mid sixties.

RB: Well, I called because you still owe me money.

RB: No, just kidding. I mean you DO still owe me money, but that’s not why I called.

RB: I called because Billy Wicks made me do it.

RB: Yeah, and Billy says if you give me any sh*t, he’s going to come kick your ass. (Now I’m the one who’s lying.) 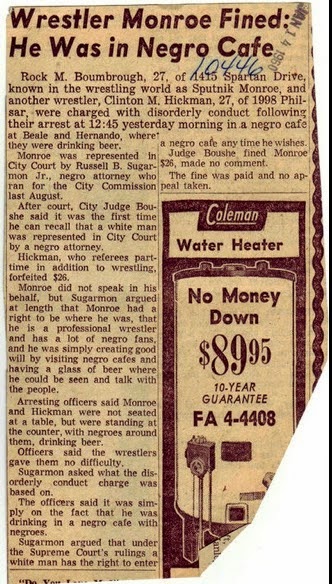 RB: He told me you would say that. And he also said you couldn’t whip an old woman even if you cheated. (I’m lying again, but I just couldn’t help myself.)

And so forth and so on. With each taunt from Sputnik, I’d make up an even more outrageous insult from Billy. What a hoot! But I guess it’s one of those deals where you’d have to be there to appreciate it. There’s hardly a day that goes by when I don’t think to myself: What a blessing to have grown up in Frayser.

Praise Be to God,