For years, I made my pizza dough with corn meal as in my first recipe. These days, though, I favor this sweeter version, but sometimes add 1/2 – 3/4 cups corn meal (as in the other recipe) for a bit of texture. Have fun with it, and don’t be afraid to experiment. (Pay no attention to the foot and flip-flop in the photo.) 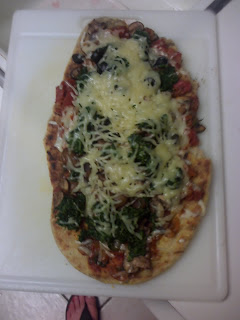 To the cup of warm water add the sugar and dry yeast. Let stand 10 to 14 minutes. Add the butter, salt and flour. Stir well, turn out and knead until dough is smooth.

Roll dough to 1/4 inch thickness to fit pizza pan. (I don’t bother rolling. I just press it into the pan and work it with my fingers to fit the pan.) Leave to rise again while you prepare the filling.

I like to bake the dough without any topping for about 5 minutes (400 degrees). Remove and then top with cheese, black olives, spinach, tomato sauce, mushrooms, sausage, etc. Or experiment with other toppings.

One of the best pizzas we ever made was when we topped this crust with some cooked spinach and some left-over peppers and onions (with plenty of grated Mozzarella and Mexican style Parmesan Cheese – they call it Cotija.).

Or try this: We’ve tried many different topping combinations, and this is one that we did recently with GREAT results.

Forget the spinach and the meat. Cook up a big batch of the peppers and onions (drain well). Slice or chop some black olives. Saute some fresh mushrooms in butter (thinly sliced). Top the pizza crust with a good layer of grated Mozzarella cheese. Cover that with the drained peppers and onions. Top that with chopped or sliced black olives. Sprinkle with pineapple chunks. Top with a light scattering of more cheese. Bake at 400 until the crust begins to turn golden.

And here’s another way of going about this. We recently tried this method of grilling the crust on the Weber. We used veggies instead of chicken, and skipped on the BBQ sauce. But the smokiness of the crust was fantastic. I messed up by making my crusts too large (hard to handle with spatulas) – I should have divided my dough into fourths instead of into halves. The crusts would have been much easier to manage. But this is definitely worth exploring, my friend.

Did it again tonight, this time using a quarter of the dough. It worked out fantastic! This one’s a keeper!

January 2, 2019: I did this tonight, and it was a huge success. I warmed up peppers and onions as well as some mushrooms and onions. I cooked some Johnsonville Italian sausage in the oven and allowed it to cool  I wilted a bag of baby spinach and set it aside as well. – I was able to stretch the dough across a large sheet pan which I’d prepared with a smearing of olive oil and a sprinkling of corn meal. I baked the crust alone for about 5-10 minutes; then topped with peppers, onions, mushrooms, spinach, tomato sauce, oregano, garlic powder, sausage, Mozzarella and Cotija cheeses. I baked it in a hot oven for about 15 minutes (Until the edge of the crust started turning brown).