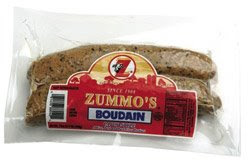 Okay, I know that we usually see it spelled “Boudin,” but for some reason, Zummo’s spells it “Boudain.” I got this recipe off a package of their smoked “Boudain,” and it’s a real winner. Well, I modified it a bit by adding onion, chopped pepper parts, and egg. Plus, I smoke mine on the Weber rather than cooking in the oven. I hope you enjoy.

Fire up the Weber. Stoke with hickory chunks.

Peel and devein shrimp. Season with cayenne, white pepper, black pepper, and garlic powder. Pan fry the shrimp until barely done. Chop shrimp into bite size pieces. Stir into the sausage mixture. Fill the peppers with mixture. For a special touch, try topping with a couple of spoons of peppers and onions.

Place the peppers in a grill-safe pan (I use disposable aluminum pie pans.) with about an inch of water in the pan. At this stage, you can put the pans on the grill like I do, or you can pop in a 450 oven. Oh, and we’re smoking these — over indirect heat. That is, I bank the fire on two sides of the Weber, and place the peppers over the middle “cool” part.

Sometimes I top the stuffing with a pat of butter or with a couple of black olives. Bread crumbs might be a good touch too. Cook until the topping is browned, and the peppers are tender. Serve with a cold beverage.